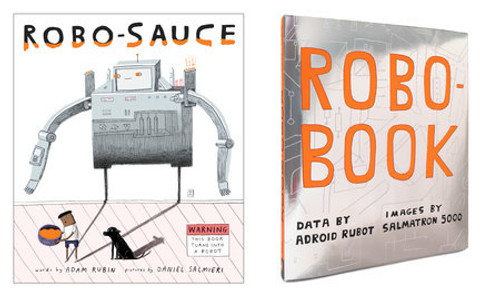 FACT: Robots are awesome. They have lasers for eyes, rockets for feet, and supercomputers for brains! Plus, robots never have to eat steamed beans or take baths, or go to bed. If only there were some sort of magical “Robo-Sauce” that turned squishy little humans into giant awesome robots… Well, now there is.

When a boy learns the secret of a magic potion called "Robo-Sauce" that turns humans into robots, it's all happy and fun times. Until robots take over the story and transform this very book into a shiny metal ROBO-BOOK (with help of a super-special fold-out surprise). Prepare yourself for a picture book technology with the likes of which humanity has never seen.

Giggle at the irreverent humor, gasp at the ingenious fold-out surprise ending, and gather the whole family to enjoy a unique story about the power of imagination. It’s picture book technology the likes of which humanity has never seen!

Are You A Robot

The Sun Was Trying to Tell Me Something