We Are Alive When We Speak For Justice 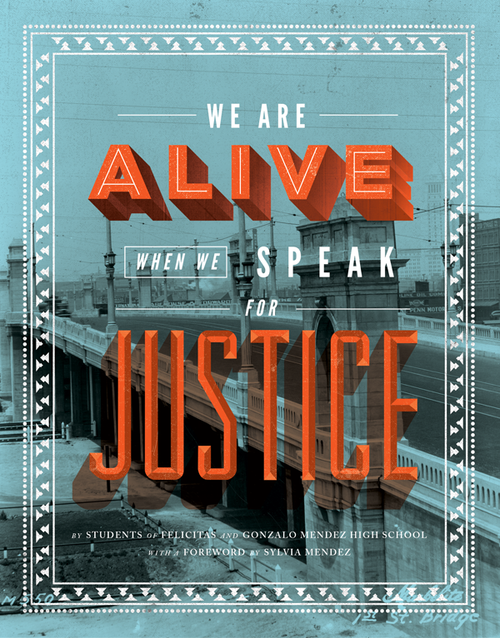 We Are Alive When We Speak For Justice

We Are Alive When We Speak For Justice
In the 1940s, after their children were denied access to “whites only” schools, a group of Latino families in Southern California won Mendez v. Westminster, which led to the desegregation of California schools and was a precursor to Brown v. Board of Education. In 2015, at Felicitas and Gonzalo Mendez High School in Los Angeles, fifty-seven students delved into this under-represented moment in history, and the story of the namesake family of their school, to write We Are Alive When We Speak For Justice. The book is a collection of personal and historical essays about a legacy of social justice in education and features interviews with activists, historians, and community leaders including Gustavo Arellano, Bobby Verdugo, Evelina Fernandez, and Sylvia Mendez herself.
“In this book, students have been given the opportunity to showcase their intellect and hopes for a better tomorrow. The students have learned, from the Mendez story and the help of other scholars, that people have been out there fighting the fight to ensure that education is available and possible to achieve, reminding them to never give up and que sí se puede.”
- from the foreword by Sylvia Mendez
Design by Diana Molleda

When the Moon is up

Sounds of Freedom: Beats on Concrete

When the Moon is up

The Sun Was Trying to Tell Me Something